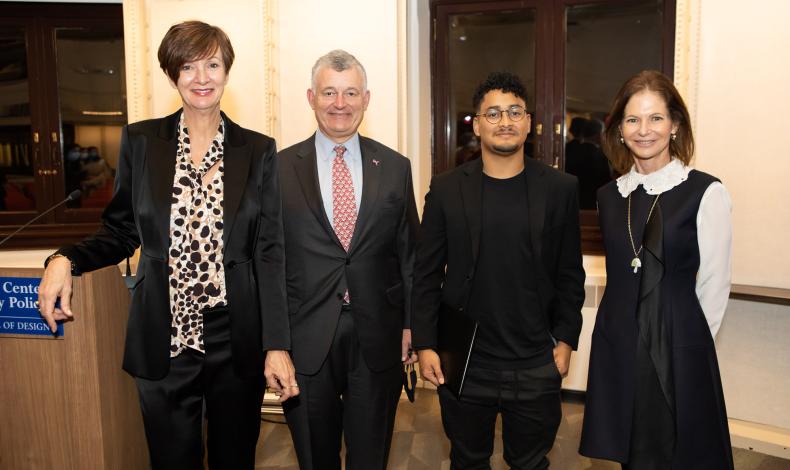 On Thursday evening at the Kleinman Energy Forum, academic leaders at the Weitzman School presented 2021 Weitzman School Awards to a graduate architecture student, a city planning student, an internationally acclaimed design firm, and the City of Minneapolis.

The annual awards include two major prizes for students and corresponding honors for professional work in architecture and city planning. The Kanter Tritsch Prize in Energy and Architectural Innovation and the Kanter Tritsch Medal in Architecture were established in 2017 with a gift from alum Lori Kanter Tritsch (MArch‘85) and Penn Trustee William P. Lauder  (W‘83). The Prize is awarded to a second-year master of Master of Architecture student, and includes a $50,000 scholarship to cover the bulk of tuition and fees for the student’s final year of study. This year’s Kanter Tritsch Prize winner is Beikel Rivas, a Venezuela native whose portfolio was selected from 28 submissions by a blind jury. In a video interview, Rivas said he hoped receiving the award would be an inspiration for other immigrant students.

“What excites me about architecture is mostly the creative part of it, how we are able to design as if we were artists and scientists at the same time,” Rivas said.

In opening remarks, Kanter Tritsch and Lauder spoke about the achievements of the current generation of Weitzman students.

“When we look at what the students who are on this campus today have accomplished, they are amazing, and they reinforce the refrain, ‘I would never be admitted today if I had to compete with all of you,’” Lauder said.

The Kanter Tritsch Medal in Architecture, which is given annually to a practicing architect or architects for leadership in energy and architectural innovation, was awarded to MASS (Model of Architecture Serving Society) Design Group, the nonprofit that operates a string of design labs across the U.S. and in Africa. The Medal was given in recognition of a range of work, including the African Leadership University flagship campus in Kigali, Rwanda; Family Health Center on Virginia in McKinney, Texas, MASS’s first completed U.S.-health project; and the Gun Violence Memorial Project at the National Building Museum in Washington, D.C. Accepting the award was Justin Brown (BArch‘04), a principal at the firm who earned his undergraduate architecture degree at Penn. After accepting the medal, Brown spoke via Zoom with Miller Professor and Chair of Architecture Winka Dubbeldam about how his Penn studies contributed to his expansive understanding of the role of architecture.

The Witte-Sakamoto Family Prize and Medal in City and Regional Planning were established by Bill Witte (C‘73, MCP‘75) and his wife Keiko Sakamoto, explained Lisa Servon, Kevin and Erica Penn Presidential Professor and Chair of City and Regional Planning, in her remarks. This year’s prize was awarded to Xuezhu (Gillian) Zhao, who will receive a $50,000 scholarship toward tuition and fees for her final year of study at Weitzman. Zhao said in a video interview that she believes city planning should work to mitigate power differentials between different sectors of urban society.

“I got really interested in city planning just because I have always been fascinated by my surrounding environment. It evolves really fast,” Zhao said. “So I’ve always been interested in how decisions have been made and why decisions were made like that, and to benefit what group of people. To me, city planning is thinking about how to distribute resources effectively and efficiently to different parts of the city.”

The Witte-Sakamoto Medal in City and Regional Planning is given yearly to a firm, team, or professional for an exemplary plan that advances plan-making in at least four of the following areas: social equity, environmental quality, design, public health, mobility, housing affordability and economic development. This year’s winner is Minneapolis 2040, a comprehensive plan adopted by the City of Minneapolis in 2020, aimed at undoing the legacies of racial and economic inequality caused by public policies. The plan, which includes recommendations to address the city’s housing and environmental crises, was developed over two years of public engagement and more than 100 public meetings.

The Weitzman School Awards were launched in 2018 with a ceremony in New York. A virtual ceremony was held last year, and the School plans to hold the ceremony in Philadelphia and New York in alternating years moving forward, said Dean and Paley Professor Fritz Steiner. The annual event, including proceeds from Thursday, has raised more than $625,000 for student scholarships.

To make a contribution to the Weitzman School Awards, visit this giving page.