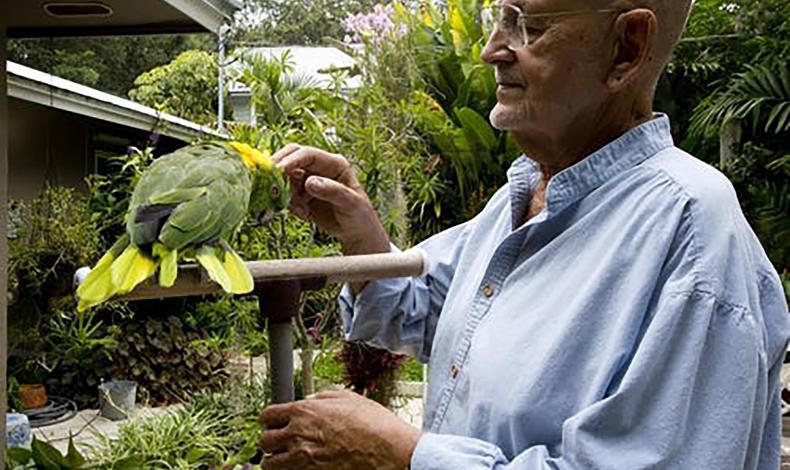 J. Roland “Jack” Lieber (MArch’62) studied with Ian McHarg, the chair of the Department of Landscape Architecture from 1956 to 1986. He passed away in 2018,  leaving an planned gift to the Stuart Weitzman School of Design to support future design students.

Driving from New Jersey to Florida in the days before the interstate highway was a slog, recalls Richard Lieber. But as a child, every year he made the trip for three weeks of family vacation with his parents and his brother, Jack. Florida was a beloved destination, and both Richard and Jack would build their lives there. It’s also where Jack built his influential firm, J. Roland Lieber Landscape Architects, designing landscapes and gardens for planned communities while taking care to be sensitive to delicate local ecosystems.

“My brother, he was always into the plant life,” Richard says.

When J. Roland “Jack” Lieber (MArch’62) passed away in 2018, many of the native and tropical plants from his personal garden were given to the Naples Botanical Garden, Richard says. Jack also left a series of gifts to his alma maters, including a $320,000 cash gift to the Stuart Weitzman School of Design, where he studied with Ian McHarg, the chair of the Department of Landscape Architecture from 1956 to 1986. The estate gift went to create an endowed fellowship fund in Jack’s name to help young architecture and landscape architecture students cover tuition costs at the Weitzman School. Richard says the gifts were characteristic of Jack, who spent his “adventurous” life serving others.

“He was one that always helped other people,” Richard says.

Jack Lieber opened his firm in 1979 and over the next several decades completed a series of landscapes for high-profile planned communities and residential developments. His work earned honors from the American Society of Landscape Architects (ASLA), the American Institute of Architects, and other professional organizations. He was especially proud of Pelican Bay, just north of Naples, where he worked with the legendary landscape architect John Ormsbee Simonds. The community, with its careful preservation of native mangroves, was considered a “model of environmental planning,” according to a 2010 article in Landscape Architecture Magazine. Lieber’s contributions showed the clear influence of his time learning from McHarg, says Charles Birnbaum, president and CEO of the Cultural Landscape Foundation.

“When you look at the work that was done in Florida at that time, I think it had incredibly high standards in terms of ecological systems and trying to live lightly on the land,” Birnbaum says.

Birnbaum would regularly see Jack Lieber at ASLA conferences and remembers him as an “irascible” figure, eager to cross swords with fellow designers. He often wore a leather motorcycle jacket, reminiscent of the prominent landscape writer J. B. Jackson. Birnbaum says he got the sense that Lieber held his education and his time with McHarg in high regard. Some of Lieber’s own work belongs in the same conversation, he says, even if it flew under the radar relative to some of his peers.

“Everyone doesn’t have a marketing and communications staff,” Birnbaum says. “I don’t think [Lieber] was terribly interested in that.”

In the years when Jack’s design firm was active, Richard helped lead a separate business that was focused on landscape maintenance. Many of Jack’s clients wanted spaces maintained with the same care with which they were designed, so Jack and Richard offered them much more comprehensive plant care and maintenance than the “mow and go” approach of other landscape services in the area, Richard says.

Birnbaum says that Jack’s attention to plants was a unique calling card. “He knew his plants. That shouldn’t go without saying, because a lot of landscape architects don’t.”

Richard remembers his brother as a laid-back person who loved maintaining his own garden. He traveled the world, including several trips to Tibet and the Amazon River. For decades he kept a yellow-headed amazon parrot as a pet. He also honored the influences in his life; on a wall in his house, he painted the names of all the people who’d helped him develop his vocation, including McHarg, Richard says.

This year, the J. Roland Lieber Fellowship Fund will help two students pay tuition and fees. One of the recipients, Olivia Loughrey (MLA’23), says that, coming from a low-income background, she was able to choose Penn over a lower-cost school, thanks to the fellowship, in order to study landscape architecture, which has been a goal of hers for years. Loughrey says she has worked as a gardener, farmer, and landscape designer and wants to pursue landscape architecture to make “accessible, functional, and beautiful places that are ecologically and socially attuned to their surroundings.

“I am hopeful that a profession in landscape architecture will provide a more sustainable and meaningful existence for myself and, through this personal grounding, allow me to be of service to others,” Loughrey says.

Richard says Jack would have been proud to see his legacy continued in the support of young designers.

“All of his schoolings were very important to him,” Richard says.

To learn more about planned giving, or to establish your own endowed fellowship fund, contact Jeff Snyder, assistant dean for development and alumni relations.