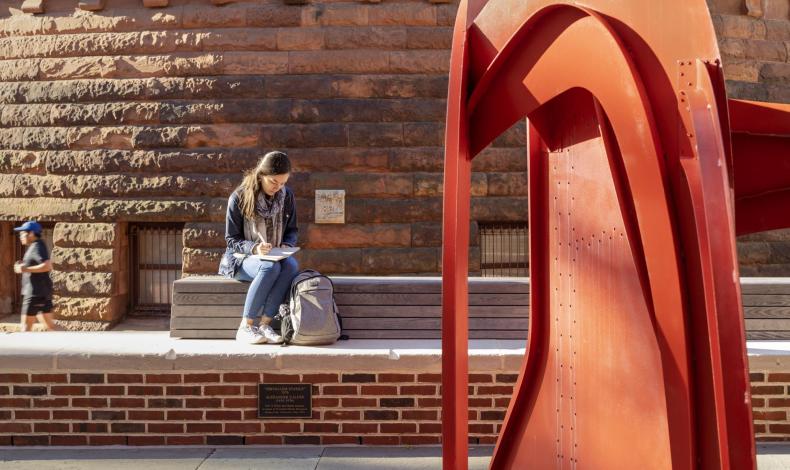 This January, after the holidays and before the spring semester began, Kylee Pierce, a first-year student in the Master of City Planning Program at the Weitzman School, spent some of her time working on a plan for a busy commercial corridor in Cambridge, Massachusetts, as part of a team of planners and designers at the Philadelphia-based Interface Studio.

Like many internships, the experience was a chance to feel out the culture of a professional planning firm and apply some skills picked up in the classroom to a real-world project. Unlike many internships, it was compressed into the course of a single week, and Pierce was asked to make genuine contributions to an important project for the firm. Pierce studied architecture as an undergraduate and worked at a design firm for a few years before coming to the Weitzman School to study planning. At Interface, she helped analyze data the firm had collected from surveys about streetscape improvements, and created visualizations to illustrate common themes in users’ responses. The materials will help Cambridge officials make decisions about future changes to the street.

“The tasks [Interface] set up for me to do weren’t just busywork — they were things they actually needed, which I really liked,” Pierce says.

Pierce’s work with Interface Studio was part of the Weitzman School’s growing externship program, which pairs graduate students with professional firms for short, intensive collaborations. The program began during the 2018–19 academic year with a focus on architecture students, and has since been extended to landscape architecture and city planning. Students select their preferred firms from among a list of participants, and the Office of Professional Development and Leadership works to place students in one of their top choices. Firms typically take on one student for a one-week stint, though some have engaged multiple students for a whirlwind “externship day.” For students, it’s a unique opportunity for networking and professional development, and for firms, it’s a chance to meet young designers and scope out potential future hires.

The program is a professional leg up for students compared to previous generations of graduates, says Mark Gardner (MArch’00), a member of the Weitzman Board of Advisors and principal at Jaklitsch/Gardner Architects.

“Other than connections that people made through professors or the Dean’s Office, I don’t think there was really an opportunity to do something like this,” Gardner says.

Gardner’s firm has so far taken on three externs, who were later hired as summer interns. He says the firm has talked with some of them about long-term employment opportunities as well. When he was a young graduate looking for an opportunity in New York, Gardner found a connection through an upper-level peer who’d landed a job at a firm there. That connection helped him get a footing in the profession, and eventually develop his own firm. Now, he counsels young people that “your network is one of your biggest assets.” And real professional experience is a critical supplement to academics, he says.

“You’re educated in a particular way, and then you get into the workplace, and you’re like, ‘Oh, this is not like what I learned in school,’ ” Gardner says. “It at least gives you an opportunity to be in an environment where you can see that, OK, I’m learning in one way, but what is practice, and what is the culture of practice like?”

During the first three years of the externship program, 116 students participated. The Office of Professional Development and Leadership continues to look for more firms to join the program, particularly for city planning; last year, partly because of the pandemic, there were many more student applicants than participating firms, says Kali Meeks, the associate director of professional development and leadership.

Ideally, externships are mutually beneficial for students and firms. Mindy Watts (MCP’06) began working at Interface Studio as a summer intern in 2005, after taking a course at the Weitzman School with the firm’s founder, Scott Page. Now, as a principal at the firm, she helps set up externship opportunities for students. Interface worked with Lily Cheng (MCP’21) first as an extern last winter, then hired her for a summer internship and kept her on through the fall, until she landed a job working on climate adaptation in Washington, D.C. Pierce has stayed on after her weeklong externship in January as well, spending one day a week helping Interface with the Cambridge project, even as she completes her first year of academic work.

Creating the most beneficial experience for students also tends to work in the firm’s favor, Watts says.

“It’s good for the firm to say: What’s something the students can bite off and have a sense of accomplishment, and walk away with a bit of a story to tell about their time?” she says. “It pretty much is work that any of our staff would conduct.”

The Office of Professional Development and Leadership is actively looking for architecture, landscape architecture, and planning firms to participate in the Weitzman School externship program. If you are interested in working with design students, reach out to Kali Meeks, associate director of professional development and leadership, at kmeeks@design.upenn.edu or 215.573.9168. Read more about the externship program here.

Other links to profies of Externships students: