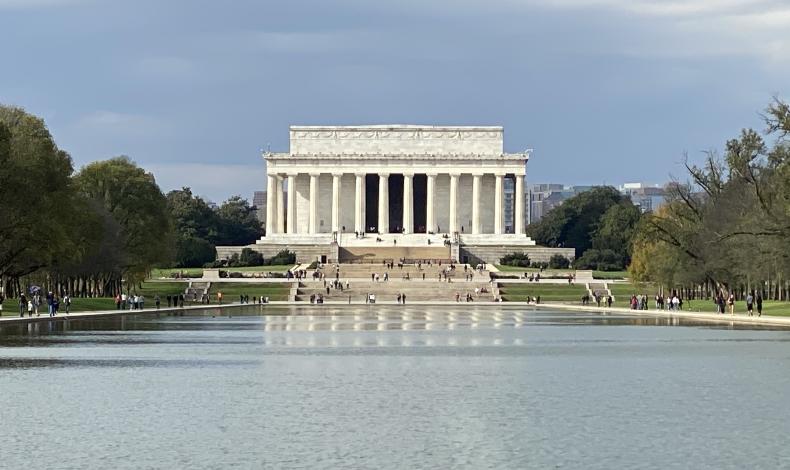 Weitzman faculty and students have been working with the National Park Service (NPS) to document the Lincoln Memorial’s physical history.

The Lincoln Memorial is one of the most recognized sites in the United States, and the opportunity to work on it “as good as it gets when you go into preservation and architectural history,” says Molly Lester, associate director of the Urban Heritage Project.

With Randall Mason, a professor in the Graduate Program in Historic Preservation, Lester (MSHP’12) and a team of Weitzman students have been working with the National Park Service (NPS) to document the Memorial’s physical history and recently completed their report.

To Mason, the real honor is the 10 years of partnership between the Urban Heritage Project, as this research initiative is called, and the NPS’s National Capital Region Office under the auspices of the Cooperative Ecosystem Studies Unit program.

“Projects like this are a research and learning benefit to the university and the field of historic preservation,” says NPS’s Julie McGilvray, program manager for preservation services at the National Capital Region. She explains, “Through the program, the National Park Service functions as a testing ground for new ideas, new approaches, and new ways to think about historic preservation and our shared heritage. Throughout our work together, the University of Pennsylvania has done just that—they are a great research partner, engaged in deeply thinking about these spaces, their care, and what they mean for the future of our country.”

Since 2011, Mason has led teams of faculty, students, and graduates in documenting and studying cultural landscapes stewarded by the NPS, from small parks to golf courses to urban boulevards like Pennsylvania Avenue. They have examined how public space and memory interact in DC, reflecting its dual role as both a city and the nation’s capital. For Mason, it was gratifying to be trusted with such a notable site.

Lester said that the NPS values its partnership with Penn because “we’re not contractors, but partners to the NPS. We are there to ask questions and think creatively.”

For the Lincoln Memorial, the Weitzman team produced what’s known by preservationists as a Cultural Landscape Inventory (CLI): a framework for documenting the present and past of an historically significant landscape. This document, which will inform the day-to-day operations of the site by NPS staff, combines extensive historical research with thorough spatial documentation for a holistic understanding of the evolution and current condition of the landscape.

Jacob Torkelson (MSHP’19) led the fieldwork component of the project, producing dozens of maps documenting every aspect of the landscape–from benches and trash cans to the allées of historic elms that frame paths on either side of the Reflecting Pool.

Master of Landscape Architecture student Christine Chung used LiDAR point cloud analysis and GIS to produce a viewshed analysis, documenting what can be seen of the Memorial from significant vantage points. Viewshed analysis is not typically done in these projects, Chung says, but the team wanted to understand how a potential bridge might affect views from the Memorial.

"Our work is to understand how [this site] has always changed, and what does that mean for how it will continue to change?"

One of the unexpected findings of that analysis was that the plantings that frame the Memorial structure have grown, the team believes, to obstruct sightlines to and from the Memorial. “It’s a really interesting question, because those are historic in themselves,” says Torkelson.

Lester, who took the lead on the historical research, found that they were carefully planned by landscape architects to frame the structure. “But at what point do you acknowledge they are now impeding on what was intended?” she says.

She emphasizes that despite a perception that the Memorial’s site is untouchable, it has been changing constantly since its inception. In the last 20 years alone, there have been improvements for accessibility and changes to increase security following 9/11.

Most surprising to Lester was the longstanding presence of rapidly-constructed Defense Department buildings intended for temporary use during World War I. The green space now containing the Vietnam Veterans’ Memorial once featured an expansive complex of “tempos”–four-story steel and concrete structures as far as the eye could see, complete with two footbridges over the Reflecting Pool–that remained until the 1970s.

This space, Lester stresses, “has never been untouchable. And so, our work is to understand how has it always changed, and what does that mean for how it will continue to change?”

These considerations are at the core of the partnership between Weitzman and the NPS, and they are crucial to the successful management of the Memorial site.

Another question that came up was around the “period of significance”—a section of the CLI framework intended to delineate why a place matters historically.

In a previous study, completed in the 1990s, the period of significance was from 1914-1933 suggesting that the original design and construction of the Memorial was the thing of greatest historical significance.

But, the team asked, does that still hold true? Take, for instance, Marian Anderson’s concert in 1939, delivered to a crowd of 75,000, after being barred entrance to Constitution Hall on the grounds of her race. Or Dr. Martin Luther King, Jr.’s iconic “I Have A Dream Speech” at the March on Washington for Jobs and Freedom in 1963. As recently as January of 2021, when President Biden illuminated the Reflecting Pool in remembrance of the 400,000 people in the US who had died from COVID-19, the Memorial has been used for decades by activists and officials seeking a national stage on which to be seen and heard.

In the report, the Memorial’s period of significance extends to the present day. According to Lester, this is atypical and could present management challenges of its own. But, she says, the team wanted to acknowledge this intangible heritage and argued “for there to be a deeper and broader understanding [of the Memorial] as a significant place.”

“There can be a perception that preservation is just about putting something in amber and making sure it won’t ever change,” Lester says. Rather, the team’s overall approach is to anticipate, embrace, and manage change as it happens. Says Mason, “​​our theory of history is that it's additive and multi-vocal, and there's no one perspective that should blot out all the others.”

It's an approach that connects the Urban Heritage Project work and Mason’s other research initiative, the Center for the Preservation of Civil Rights Sites.

The Urban Heritage Project team’s next engagements with the NPS National Capital Regionwill also focus on Black history in Washington, DC, at three sites: Mary McLeod Bethune’s Council House; the C&O Canal that tells the history of Black Civilian Conservation Corps crews; and cabin camps in Virginia and Maryland that were structured by segregation. Mason is also looking forward to collaborating with Dumbarton Oaks and Tulane University to map civil rights heritage in Washington DC and area parks.

“We're not just kind of noting the presence of these issues,” Mason said; “we are really trying to center on them.”