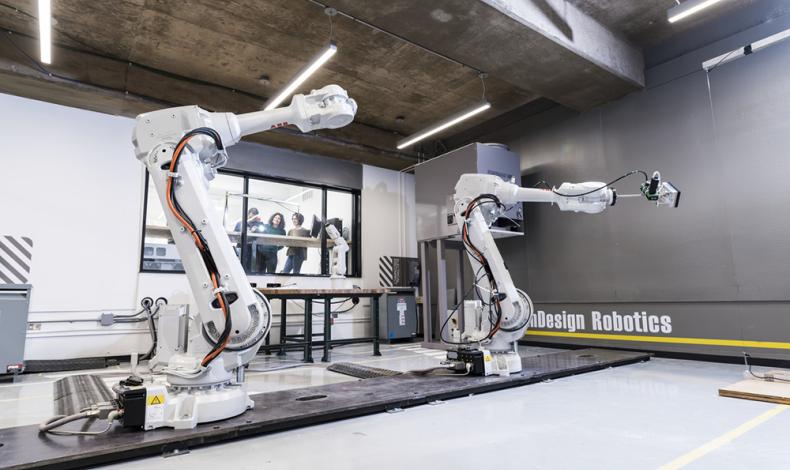 “This project has the potential to create something that’s architecturally interesting on a low budget.”

The prototype, when it’s finished, will be a one-to-one scale model of a tiny house, with the entire building envelope under 400 square feet. It will be made of concrete, with all finishes and furnishings—from sinks to shelving—built into the form. It will consist of about ten total pieces, which can be assembled and disassembled. Each piece will be cast inside a mold that will be cut by a robot in the ARI Robotics Lab, located in the basement of Meyerson Hall.

But that’s about all that Robert Stuart-Smith and Masoud Akbarzadeh can say about the design at the moment.

Stuart-Smith and Akbarzadeh are both assistant professors of architecture at PennDesign. Each runs a research group—the Autonomous Manufacturing Lab in Stuart-Smith’s case, and the Polyhedral Structures Lab in Akbarzadeh’s—that falls under the umbrella Advanced Research and Innovation Lab, led by Miller Professor and Chair of Architecture Winka Dubbeldam. Starting last year, with a gift from Penn alumnus Hanley Bodek (C’77) to support hands-on design and construction experience for students, Stuart-Smith and Akbarzadeh began work on a tiny house prototype to be displayed and open to the public. They’ve taught a seminar and a studio and enlisted more than two dozen student researchers in the project. If they’re successful, the final result—they haven’t committed to a completion date yet—will open a new chapter for housing that could be developed anywhere.

“It’s a siteless house, so it’s a prototype that’s designed for disassembly and relocation,” says Stuart-Smith.

Working with complex formed cavity concrete and robot technology to develop more efficient methods of both design and fabrication, the team hopes to model a type of construction that has lower costs for both labor and material.

“We’re trying to test principles that we think can reduce the cost and environmental impact of building and could be applied to many other buildings,” Stuart-Smith explains. “And a small house is a good, economical way to explore those ideas.”

But rock-bottom affordability isn’t the goal. And aesthetic considerations have been factored into every design decision they’ve made.

“We’re not so much concerned with competing with the cost of a regular tiny house,” says Stuart-Smith. “We’re more interested in developing a higher-quality method of building that would be competitive at cost in general for building construction. It’s also an opportunity to produce a state-of-the-art design that is not so easy to achieve without robotic fabrication.”

The tiny house typology allows the team to experiment with fabrication techniques, assembly, and aesthetics all at once, says Akbarzadeh. And the formal design is meant to be guided by the fabrication process.

“We can fabricate almost anything—almost any type of geometry in terms of complexity,” Akbarzadeh says. “But one of the constraints of the design was to only restrict ourselves to ruled surfaces—that means the geometry that can be generated using one wire cutting the volume.”

Ian Pangburn (MArch’19) and Mariana Righi (MArch’18) began working on the project in the studio and seminar offered by Akbarzadeh and Stuart-Smith. Righi had worked on housing projects before in her native Argentina, but on a neighborhood scale—never at the scale of a single tiny house. She began working on design and fabrication of one detailed corner of the house, and the project has been an exercise in finding a geometry for the design that is beautiful as well as rational, she says.

“We don’t want something that could be built with other techniques,” says Righi. “We’re trying to express this new construction.”

The design process has involved a lot of trial and error, says Pangburn. Every time the team meets, they critique the current digital model for “its ability to work and its ability to be beautiful to some capacity.” They’re trying to create something that can be fully functional as a bedroom, bathroom, kitchen, and living space, with all the modern amenities—something that’s efficient and pleasant to occupy. And the biggest obstacle, Pangburn says, is doing all that in a structure that can be put together and taken apart any number of times. He’s worked on apartment designs before, but never refined anything to this degree.

“This project has the potential to create something that’s architecturally interesting on a low budget,” Pangburn says. “Finding ways to bring high design to basically every corner of society—it’s a really old goal for modern design, but I think it's one that’s still important.”