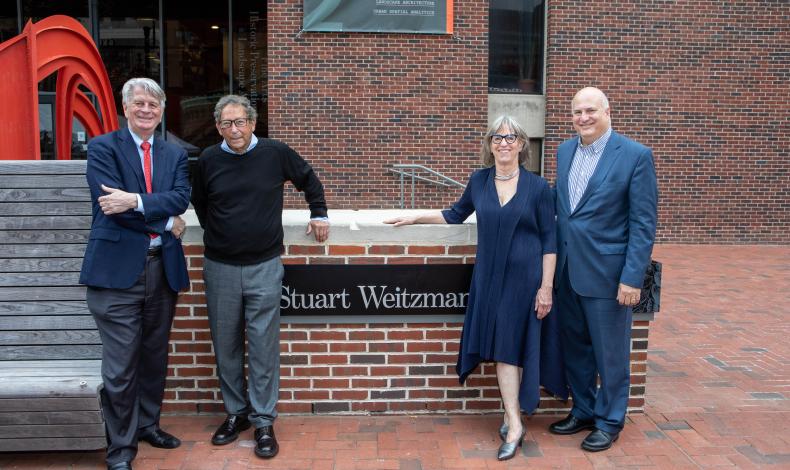 Stuart Weitzman Plaza, the popular gathering place for students, faculty, and visitors from across the Penn campus that was extensively renovated in 2021, was celebrated on May 13 with a ceremony.

Stuart Weitzman Plaza, the popular gathering place for students, faculty, and visitors from across the Penn campus that was extensively renovated in 2021, was celebrated on May 13 with a ceremony on the plaza between Meyerson Hall and the Fisher Fine Arts Library. Scheduled during Alumni Weekend, when the University welcomes graduates back to campus for class reunions and other events, the program underscored just how closely connected to their alma mater they remain.

The plaza is named for Stuart Weitzman, Wharton Class of 1963, in recognition of a series of transformational gifts to the University and for whom the School of Design was named in 2019.

“We are here today because Stuart Weitzman, as prescient as he is generous, shared our vision for the ground we’re standing on to become one of Penn’s great gathering places,” said Dean and Paley Professor Fritz Steiner.

The ceremony brought together alumni of all ages, and in remarks during the ceremony, Mr. Weitzman said he hoped it would become a center of campus life.

“If I knew that this plaza would create such excitement, I would have built two,” he said.

Craig Carnaroli, senior executive vice president at Penn, said Weitzman Plaza represents the “completion” of the campus landscape master plan that was begun under former Penn President Martin Meyerson, for whom Meyerson Hall is named. The plaza enhances the campus’s greatest strength, which is its interconnectedness, Carnaroli said.

The plaza was designed by a team at OLIN, the Philadelphia-based landscape architecture firm founded by Practice Professor Emeritus Laurie Olin, who worked on the campus master plan as a young faculty member. It features a long, high-backed wooden bench made with heat-treated ash, and the removal of a brick wall that formerly split up the space has made space for a wide staircase and gathering space coming up to campus from 34th street. The plaza was envisioned as “a much-needed, spacious outdoor living room on campus,” said OLIN CEO Cindy Sanders, an adjunct professor of landscape architecture at the Weitzman School who also spoke.

The designers who worked on the project shared more than five decades of experience in the School of Design, Sanders said. They included Richard Newton (MLA’91), Anneliza Kaufer MLA’14), Moya Sun (MLA, MCP’17) and Jessica M. Henson (MLA’10). The renovation included the installation of several yellowwood trees, a reference to historic student protests over the removal of several of the same species when Meyerson Hall was being built in the 1960s. More than a reinterpretation of the space for a multitude of users, the project was “an act of deep love” by its designers, Sanders said.

Earlier in the day on Friday, the University announced that the Morgan Building across 34th Street from Meyerson Hall would be renamed Stuart Weitzman Hall based on Stuart Weitzman’s enthusiastic support for the project to renovate the historic structure, adding a new wing to its south side. The building, which currently houses studios and offices for the Department of Fine Arts, will be expanded and redesigned by KieranTimberlake, the award-winning architecture firm founded by alumni and former faculty members Stephen Kieran (MArch’76) and James Timberlake (MArch’77).

Friday’s celebration also featured a short documentary video about the plaza’s history and OLIN’s design that is available to watch on the School’s Vimeo channel.